Back to reviews in Benelux Both man and motor car need their treats. For your correspondent and his Silver Cloud, one of the sweetest begins the moment when the Eurotunnel train comes to a halt, its doors open and we glide out onto the smooth tarmac of the Continental motorway, heading for a restaurant with rooms (and parking, of course). When that restaurant is as good as that at L’Hostellerie Au Gastronome, at Paliseul in Belgium, our joy in unconfined.

Here is a tip for those of you who also have the good sense to drive Rolls-Royce motor cars and intend to use the Eurotunnel train: put yourself in the lane for high vehicles. You will thus be able to use those coaches which are not only higher inside but also (more important for us) wider. This makes driving along inside the train very relaxed indeed. Then, with no stress or anxiety, 35 minutes later you are in France. Little wonder I am a fan of Eurotunnel. 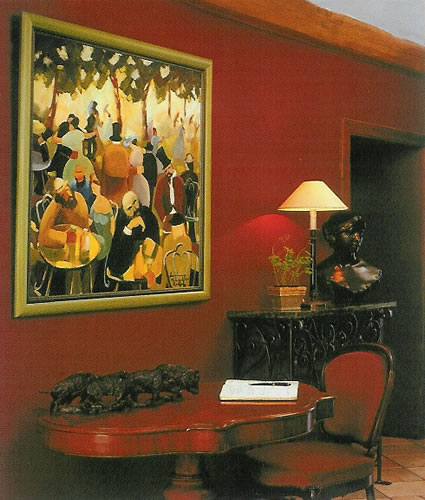 Whether you seek out Au Gastronome on its own account, or you use it as a stopover on your way to Switzerland or the Italian Lakes, its location is ideal. 230 miles from Calais (and conveniently close to exit 24 of the E411 motorway), it can be reached easily in a day. And, although this stone building exudes rustic sophistication and fills its public spaces with good modern art, its accommodation will not cripple your bank account. Remarkably, double rooms with breakfast can be had for only 90 euros. My own room, number 15, was the top of the range option, but was still just 175 euros, bed and breakfast for two. And this, remember, is at an establishment where the dining room boasts two Michelin stars. I feel the word ‘bargain’ coming on.

My apartment had some style, too. Air-conditioned and spacious, with ochre-coloured walls and a floor of light wood, its sofa and easy chairs were in wicker work and there was an ancient wooden school desk – complete with a sloping top – in case I felt the urge to recapture a few moments of my youth. From the windows I could look out at the lovely, flowery garden. And the tiled bathroom was equally engaging – long, thin and pale blue, with spotlights, two wash basins, a large tub and a separate shower.

Three generations ago the Libotte family opened this place as an oasis for hungry travellers. It is next to the railway station, and occasionally a train still rumbles by, to remind you of the establishment’s origins. Nowadays, however, visitors to Paliseul – which, it must be admitted, is not the prettiest village in the world – are likely to be coming, not for some modest sustenance for their journey but for a gastronomic treat at one of the finest tables in Belgium. Michel Libotte now mans the stoves. He is tall and thin and looks more like a learned academic than the fine chef he undoubtedly is. The menu is in French, which is appropriate – for this is essentially a grand French restaurant. Monsieur Libotte sends his dishes into a beamed dining room with red tiles on the floor and fawn cloths on the tables. I sat in a pink velvet fauteuil and noted the decent Schott glasses and the butter in a miniature version of a copper frying pan. I would have preferred to be without the canned entertainment, but since it was big band music from the 1940s I found it pleasant enough, particularly as the service was on the leisurely side.

Set menus are offered at 65 euros (for 5 courses) and 115 euros (for 7 courses). I chose 4 courses from the carte (for 129 euros). I must mention the amuse-gueule, which included an absolutely delicious glass of warm Parmesan cream. The first of my chosen dishes was steamed crayfish with cauliflower cream and caviar – beautiful in its presentation, soft and subtle in its tastes. Then a combination which must be brilliant because I use it myself: foie gras and beetroot. Actually, the goose liver came in two preparations – poached with truffle and fried with girolle mushrooms and the beetroot. For the sheer exhilaration of its tastes and textures, this was certainly the star of the evening. Next was my duck, in an almond crust, with peaches – the breast served first, the legs served second with a salad. The conclusion was a soft and tasty gratin, with lemon, strawberries and rhubarb. About 300 offerings compose the wine list, which – as you would expect – is the work of a Francophile. Prices range from 24 euros for a dry white Bordeaux to 671 euros for 1975 Pétrus. The latter is a very friendly price in restaurant terms, and there are other great clarets at similarly tempting prices – like 1978 Margaux at 250 euros, 1979 Lafite at 300 euros and 1986 Palmer at 180 euros. I approved heartily of the strong section of Languedoc-Roussillon, which includes the wonderful Grange des Pères, 1999, at 162 euros. I went to Burgundy for my white, a 1997 Meursault with green fruit, elegant acidity, and – after a spell in the glass –some attractive toastiness (Coche-Dury – 125 euros). Bordeaux provided my red, from a quite difficult vintage. L’Eglise Clinet 1993, after decanting, although still quite stern, gave off an appealing vegetal nose.

In the morning I broke my fast in the sunshine, next to the swimming pool, with rolls and strawberry jam, ham and cheese, a bowl of fruit salad and good coffee. Afterwards I topped up the Royce with a spot of oil. As we drove away, our faces were wreathed in smiles. Both man and motor car had enjoyed the treat.