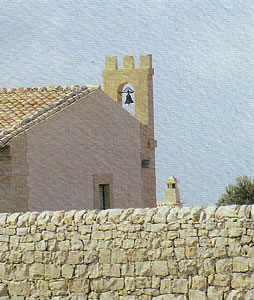 Tragic events can sometimes cause the creation of great works of art. In 1693 an earthquake of horrific proportions wreaked havoc in the south east of Sicily. Whole cities were reduced to rubble. Yet the consequent rebuilding was a triumph. Indeed, it resulted in some of the most impressive and architecturally coherent small towns to be found on the face of our planet – places like Noto, Ragusa and Vittoria. The greatest book in English on this Sicilian Baroque was written by the traitor, Anthony Blunt. I could not resist the desire to see these places for myself. But, sadly, this is not a part of the world populated by luxury hotels, so – as the base for my tour – I sought out a hostelry with a remarkable history, the Eremo della Giubiliana.

I saw the flag first, fluttering from the ancient tower. That the tower is so conspicuous is no accident. It was built as a watch-out and as a defence against raiding pirates. From its top, I was told, you can still sometimes see Malta and the coast of Africa. In the 16th century the Knights of Malta occupied the building, and there is evidence that the Grand Master of the Order of St John used some of the rooms (now made into ‘The Grand Master’s Suite’) in 1526. Ten years ago Vincenza Jolanda Nifosì, whose family has owned the property since the 17th century, decided to restore the structure and open it as an hotel. 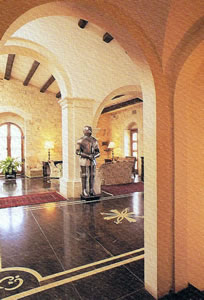 Having coped with the answer-phone system at the impressive wrought iron gates, I drove up to the entrance. Once inside, my immediate impression was good. There is a touch of the baronial castle here, with high ceilings, lots of exposed stonework and even a suit of armour. I was to stay in one of the cottages, so it was back into the car, back through the gates and in through some more electrically operated gates a few yards up the lane. Now I was driving across the hotel’s private airfield. I arrived at number one of the five bungalows, named Antoine de Saint Éxupery (220 euros, bed and breakfast for two).

I entered, through a sliding door of plate glass, straight into the bed-sitting room. With a stone floor and fireplace, a sloping roof with beams, white walls, Persian rugs and air conditioning, this was a spacious example of what we might call ‘rustic chic’. My bathroom of blue tiles was also of a decent size, and accommodated a large tub and a bidet, as well as fitted wardrobes and a safe. The view – over the dry stone wall, across the (unused) runway and fields, to the distant sea – was restful. Indeed, the overall sense of being away from it all was very strong. (Having to drive to the house for meals did, however, have one unfortunate sartorial consequence. It meant that I could not wear bespoke shoes for dinner, as I will not risk scuffing them on car pedals.) 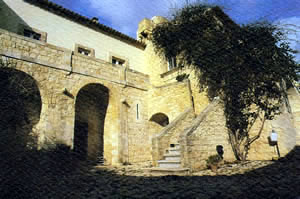 Outside was my own little garden, with a palm tree, and a patio, with my own barbecue. Bicycles were also provided – but not, of course, used by me. It was quite pleasant in the afternoons to sit here, shaded from the sun. The only sounds were the songs of the birds and – less welcome – the slight buzz from the electricity pylons, which stride across the back of the property. I think I would have preferred to be in the main building, particularly as the independent boiler system for this cottage did not always want to supply as much hot water as I required. (Junior suites in the hotel are 300 euros a night, bed and breakfast for two, and the Grand Master’s suite is 820 euros.)

I liked the dining room. A large chamber of white-painted stone with a round arch and a beamed ceiling, this again put me in mind of a Scottish castle. My back complained about the lack of support from the chairs and my ears complained about the dismal canned music. But the waiters came to the rescue, with cushions to relieve my spine and a twist of the controls to extinguish the noise. Then I was able to tuck into the food. (Expect to pay 60-70 euros for 4 courses, or 45 euros per person for the half-board arrangement.)

From the various dishes I tried, I particularly enjoyed the pastas (like tagliatelle with beef and pappardelle with lamb) and the opening courses (like veal carpaccio with Ragusano cheese and aubergine pie with ricotta cheese). My meat dishes, like rabbit with olives and roast lamb with potatoes, were more ordinary and sometimes, because of bones, hard work. Puddings comprised mainly fresh fruit or sorbets.

Prices for the one hundred bottles on the list run from 18 euros for a local white made from the Ansonica grape (Lighea, 2006) to 150 euros for a 2001 Barolo (Cannubi, Da Milano), with most bottles being in the 20-40 euros range. Sicily dominates the cellar, as you would expect, so a stay here is a good opportunity to try some of the island’s offerings. The hotel produces its own wine. Its white is very dry, firmly structured and provided me with attractive notes of lemon, lime and melon (Donna Jolanda, 2005 – 20 euros).

From my cottage I sped hither and thither and was soon a confirmed fan of the Sicilian Baroque, with its swirling golden stone and suggestions of Spanish influence. Each evening I returned for a decent meal and a sound sleep, and each morning I drove over to the dining room for a plate of ham and a selection of cakes and tarts from the breakfast buffet. If you, too, want to view the architectural wonders of this corner of Sicily, the Eremo della Giubiliana makes a good base. 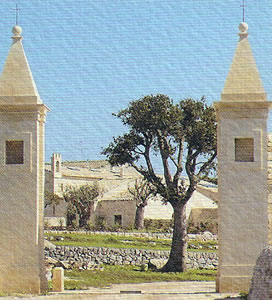 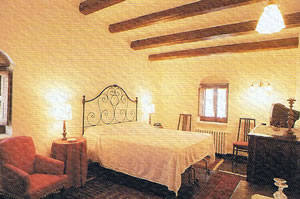