Back to reviews in Channel Islands 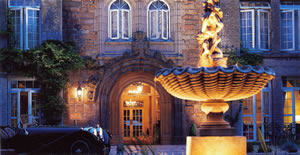 Jersey is a charming place of narrow lanes, pretty coastline and ancient castles. Its drivers are the most courteous I have yet encountered, and always seem to be looking for opportunities to display acts of kindness to their fellow motorists. It also has its unexpected gems. This visitor, certainly, was astonished to find a remarkable work of art by the famous French glass-maker, Renée Lalique. In 1934 the widow of the splendidly named Jesse Boot – the first Lord Trent and the founder of Boot’s the Chemist – had the great man transform the interior of her local church, so that it now has a glass font, a glass altar, glass screens and much more, all bearing the famous stamp, ‘R.Lalique’. And, as if all this were not enough to tempt one to fly or sail to Jersey, the island has a famous hotel – Longueville Manor. 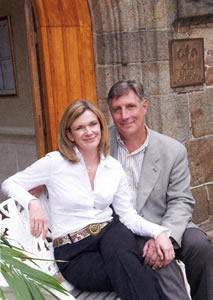 The first mention of a house on the site of the manor is in 1332, but the earliest part of the present building probably dates back to the mid-16th Century. In those days St Saviour would have been a distinct settlement, but now it merges seamlessly with the island’s main town, St Helier. But the exclusivity of the hotel is preserved, for the rest of the world is kept at bay by the manor’s high front wall and its surrounding acres of garden and woodland. During the Second World War the property was used as officers’ quarters by the occupying Germans, and it fell into a sorry state thereafter. To the rescue, in 1949, rode Sidney and Edith Lewis, who rapidly turned the derelict manor into an hotel renowned for its luxury and its friendly hospitality. Now Malcolm and Patricia Lewis (pictured) continue that noble family tradition. They, rightly, are constantly seeking to improve the prize they have inherited. Most recently, this has meant the introduction of a lighter, more modern style (the work of Patricia Lewis) to much of the interior décor of the hotel’s 30 rooms. 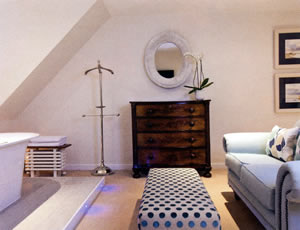 When I walked into my billet on the second floor, I found an example of what has been achieved. Room 30 is designated a Junior Suite and is therefore £450-£700 a night, bed and breakfast for two, according to season. As you can see in the photographs, this was a pristine place of light colours, with pale blue (for the sofa) and beige (for the carpet). The pieces of polished mahogany – like the chest of drawers and the small breakfast table – provided a warm contrast. I estimated the size of the bedroom to be about 16 feet by 13 feet, which meant there was ample room for… the bath. Yes, the bath tub stood on a dais beneath the shuttered window and was the dominant feature of the bedroom.

Lighting was provided by three table lamps and various (dimmable) spotlights. On the walls were watercolours of coastal views. In the fitted wardrobe were a private safe, an iron and an ironing board and a portable electric fan. (This last would be useful in summer, for the manor – like most ancient buildings – does not have air conditioning.) The view was towards the outdoor swimming pool and the hotel gardens beyond. In the bathroom (a word with which I will persist, despite the bath’s migration into the bedroom) were two wash basins, the loo and a large walk-in shower. Toiletries were by REN and the towels were of the very best sort – enormous, white, fluffy and soft. 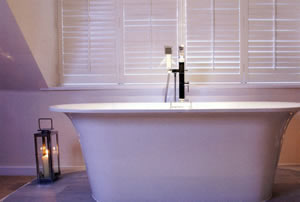 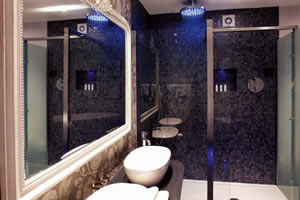 Longueville Manor has long been famous for its food. Chef Andrew Baird (pictured) puts stress on using local produce and on handling that produce with simplicity. This strikes me as an admirable approach, and it certainly resulted in some very good eating during my stay. There are two dining rooms, and I made it my habit to occupy a corner cable (number 15) in the Garden Room. (The panelled Oak Room is smaller and darker.) Here I was looked after exceptionally well by the Hotel’s Managing Director, the smiling Pedro Bento (pictured), by the efficient Assistant Manager, Marzena Kozyra, by the attentive Junior Maitre d’, Paulo Freitas, and by excellent waiters, like Raoul. My dinners proceeded at a stately pace, and were accompanied by canned music. I am no fan of such music, much preferring to be surrounded only by the ‘natural’ sounds of a restaurant, but at least its level was modest. I sat in an armchair made comfortable for me by a cushion brought from one of the sitting rooms. Before me was white napery and good glassware by Riedel. The lighting was pleasingly soft, and I was pleased to observe that members of the waiting staff (in damson aprons) carefully re-folded the napkins of those who left the table for a moment.

The kitchen at Longueville Manor is wonderful at soufflés. I had three: a truly luscious cheese one to begin lunch, an intriguing coconut one to finish dinner and – indisputably the best of the trio, and made especially for me after my request to Mr Bento – a raspberry one at dinner so fruity, so light and so ravishingly delicious that it quite took my breath away. That raspberry soufflé was itself sufficient reason to make the journey to Jersey. But there were other goodies, too. Langoustine tortellini with baby leeks, truffle and sweet peas was entrancingly delicate. Precisely grilled scallops with beetroot (a splendid partnership), crisp potato, mango coulis and pancetta showed impressive culinary skills. Grilled fillet of beef with slow cooked oxtail was an example of the intelligent use of fine meats. And roast turbot brought lovely, firm fish – with, as a treat for this potato-loving boy – a dish of some of the new potatoes for which Jersey is famous. (Three courses from the carte are £57∙50. A three course set dinner is £37∙50.) 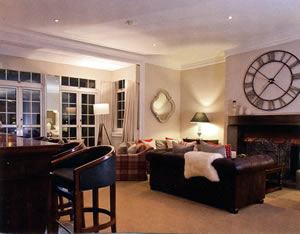 I returned to the Garden Room and to table number 15 for my breakfasts. From the comestibles – cold from the buffet, hot from the kitchen – I must make special mention of the fruit. The raspberries, pineapple, melon and stewed pears were truly wonderful. The marmalade and the jam were also very good. With my pots of coffee, ice cubes, smoked haddock and bacon and mushrooms, these leisurely mornings were highly enjoyable.

Indeed, that would be the summary of my visit: highly enjoyable. Longueville Manor offers courtesy, refinement, style, comfort, high standards of service and delicious food – all in pleasantly relaxing surroundings. It is the perfect excuse for visiting Jersey. And then, of course, you have the church with all that glass by Monsieur Lalique… 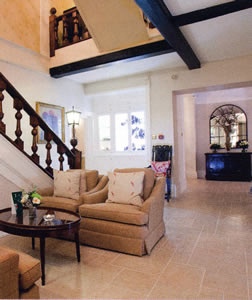 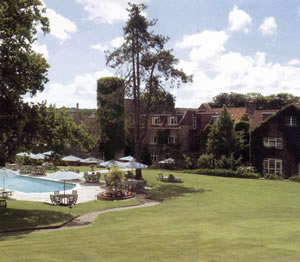 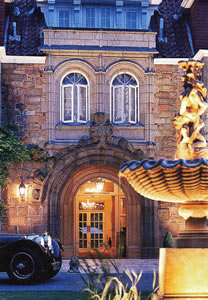