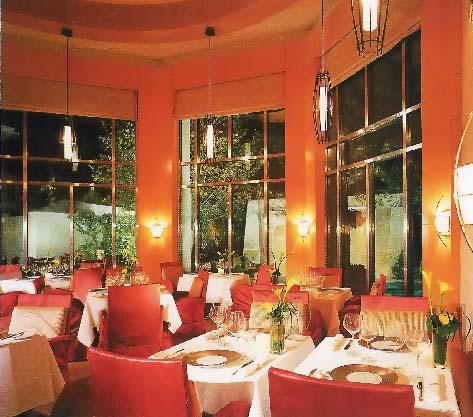 Southern California has everything I like.  Well, not quite everything – there are no mediaeval cathedrals.  But nearly everything.  And the diversity of its hospitality is matched by its quality.  Here are my experiences at three hotels: the first, a model of sophistication in the middle of town; the second, one of the world’s finest ‘retreat’ hotels, set in lush countryside; and the third, a seaside bargain.  Plus a couple of truly excellent restaurants.

As soon as my Cleverley brogues touched the beige marble floor of the lobby, I knew I was going to like the Raffles L’Ermitage in Beverly Hills.  (Where in Beverly Hills?  Well, close enough to the serious shopping for the hotel’s Lincoln Town Car to whisk me to Rodeo Drive in three minutes.)  Light, elegant and spacious, this places oozes calm and luxury.  Outside the sun was shining and the temperature was rising, but here all was quiet and cool.  Straight lines, glistening surfaces and precise lighting combine to create an environment which pampers and flatters.  I am not always a fan of modernity, but when it is so subtle and so gentle I find it lifts my spirits no end.

And room 410 – a deluxe – was as splendid as the public rooms (£300 a night).  I loved not only the soft, controllable lighting and the sliding doors and screens in English sycamore, but also the colour scheme of off-white (the walls), pale grey (the easy chairs, the bedspread and the carpet) and light brown (the woodwork and the leather of the chairs at the writing table).  And best of all was the feeling of roominess.  Seldom have I been provided with so much uncluttered floor space.  I could have danced, danced, danced all night…

But dinner called.  So, after a brief moment on my balcony looking up at the famous ‘Hollywood’ sign, it was through my dressing room and into my bathing chamber (more beige marble), to soak in the large tub while I watched the Simpsons on my second television (a tiny cousin of the huge – 40-inch screen – beast in the bedroom).  Thus prepared, I ventured down to Jaan, the hotel’s restaurant.  Jaan?  Ah, your Sanskrit is obviously as rusty as mine – it means ‘bowl’.

Beneath a dome I sat in an armchair draped in silk before a white tablecloth.  Good Riedel glasses, an excellent waiter named Joe, soft lighting and a room of intimate proportions – good.  From Chef Bruno Lopez’s kitchen came some beautifully presented dishes.  None fell below a ‘very good’ rating.  Marinated tomatoes with greens, Parmesan shavings and balsamic dressing were light and refreshing; foie gras with quince purée and lime gelée was delicate and caressing; veal tenderloin with truffled macaroni and sauce bordelaise was beautifully judged; and roasted banana bread pudding was well conceived and executed.  (£50 for these four courses.)  From my drinking, I commend to you a Sonoma cabernet, full of chocolate and tobacco (Chalk Hill, 1998 - £85), and a superb Canadian ice wine, a lovely balance of sweetness and acidity (Ehrenfelser - £90, half).  And I must mention my delicious ‘European breakfast’: first class cheeses, grapes, raisins, nuts, pastries, raspberry compote and coffee – all for £12.50.

Now it was time for the countryside.  About 100 miles south of Beverly Hills is Rancho Santa Fe, a tiny town which is one of the wealthiest communities in California.  (I wandered into the local supermarket, and found the shelves of the wine section stacked with first-growth clarets…)  And one of the brightest jewels in this most sparkling of crowns is the Rancho Valencia.

Here are 40 acres of landscaped grounds on top of a hill, dotted with bungalows and 18 tennis courts.  The sheer beauty of the place is difficult to convey, but close your eyes and imagine a collage of flowers, lawns and orange trees and suppose that you are sitting on a wooden terrace, sipping tea from fine porcelain and being soothed by the sound from below of rackets hitting balls.  If you now have a smile on your face, you have glimpsed something of the world-class loveliness of the Rancho Valencia.  Such loveliness naturally costs money, and – should you want the absolute privacy of The Hacienda (with its three bedrooms and private swimming pool) – you will need to pay well over £3,000 a night.  More modest accommodation can be had, however.

Such as the Del Mar Garden Suites – in one of which (number 113 – around £400 a night) I stayed.  With spacious sitting and sleeping areas, a working fireplace, a high roof, air conditioning, a proper dressing room and 6-foot fluffy bath towels, this cream bungalow was a delight.  Everything – from the terra cotta floor tiles to the country-style occasional tables – was of such high quality.  And through the French doors was my own little garden.  I put Grieg on the cd player, made a pot of Lapsang (from tea which had been procured specially for me and rushed to my door by one of the eager young men who provide the impeccable service here) and sat on my sofa, gazing out at the flowers.  But I had forgotten to ask for lemon.  No problem.  I simply walked outside and picked one from a lemon tree.  Sometimes life is very good indeed.

I dined in the restaurant – a room of bleached wood, gentle lighting and large, well-spaced tables – and enjoyed four courses of Chef Steven Sumner’s ‘Californian/Mediterranean’ cuisine: a green salad with filo parcels of goat’s cheese, lobster with a champagne butter sauce served in a high Martini glass, rack of lamb with a mustard crust and a chocolate soufflé (£50).  French and Californian bottles dominate the cellar.  My splendid viognier was from the Napa, with lots of honey and ripe melon (Araujo Estate, Eisele, 2000 - £46); and my cabernet was from Sonoma, with a perfumed nose and a dry finish (Kalim Reserve, 1992 - £66).

Over a marvellous breakfast of sausages (‘Hickory Wood Fired English Bangers’, no less), poached eggs, rye toast and a dish of raspberries, I pondered whether there was anything thereabouts which could tempt me away – even for an hour or so – from the magnificent retreat which is the Rancho Valencia.  Only one thing could – and did.  Dinner at Mille Fleurs.

Santa Fe.  Through a courtyard, past a fountain, and I was in the beamed dining room, with its whitewashed walls inset with Delft Tiles.  Who should greet me?  None other than Clark Kent, aka Superman.  But no, it turned out to be Julien Hug, son of Bertrand – a young man who certainly looked capable of shedding his smart suit and flying off to save the world.  Instead, he devoted his energies to looking after yours truly – very well.

From an impressive list (1988 DRC Richebourg - £500; 1998 Sassicaia - £270; 1976 Mouton Rothschild - £150) I quaffed a well-structured chardonnay of nuts and raisins (Patz & Hall, Durrell Vineyard, 2001 - £50) and a glorious, heady, liquorice and black fruit meritage (Beaulieu Vineyards, Tapestry, 1999 - £60).  And my first two dishes were even better: a complex, subtle and delicious salad of greens, beets and cucumber; and a wonderfully balanced combination of foie gras, rhubarb, shallots and cognac.  Roasted guinea fowl with truffled sauce and oeufs à la neige were more ordinary, although still enjoyable.  These four courses cost £46; a three-course menu is available at only £26.

So I trundled 15 miles further south – to pretty La Jolla (pronounced La Holla), just north of San Diego, and to my seaside bargain.

The Hilton La Jolla Torrey Pines was opened in 1989 and is 2 miles away from the designer shops and cliff-top walks of downtown La Jolla.  (This distance need be of no concern, for you can use – as I did – the hotel’s car and driver to provide complimentary rides to and fro.)  This property is as bright as a new pin, is spotlessly maintained and is cleverly designed so that every room enjoys not only privacy but also a balcony with a view.  From room 4074 I looked down onto the blue of the swimming room, across at the green of the adjacent golf course and beyond to the grey of the Pacific.  Not bad for £165 a night.  And this was no poky little cupboard, but a chamber in subdued yellows and browns which easily accommodated a decent sofa and a writing desk.

There was lots of space, too, at the hotel restaurant, the Torreyana Grill.  I settled myself in a wicker armchair, next to the monumental copper staircase and ate three straightforward, properly constructed dishes from Deborah Schneider’s menu:

a spinach and arugula salad, enlivened with blue cheese and the intense flavour of sundried strawberries; tasty fillet of beef; and a bread and butter pudding (£30).  There is some worthwhile drinking on the brief wine list.  Both my bottles came from the Stag’s

If you feel the call of some food to remind you of the South of France while at the Hilton, you should follow my example and head for Tapenade, in downtown La Jolla.  Here waiters in black waistcoats and white aprons will stride across the wooden floor to place on your small table dishes of giant quality.  For Jean-Michel Diot is a chef of real talent.  In Europe, the dishes I ate would put him in the two Michelin star class.  They really were that good.  Ravioli of wild mushrooms with white truffle oil, fried foie gras with Granny Smith apple and red pepper, venison loin with a poached pear and red burgundy sauce, and a warm soufflé peanut tart with banana compote and caramel ice cream.  Precision and flair, delicacy and balance – all were evident throughout.  This meal was a snip at £48.  There was canned music, but since it was the divine Ella Fitzgerald, how could I complain?  Wine starts at about £20 a bottle, but you might want to splash out on a good claret, like 1995 Pape Clement at £120.

So, finally, I had to leave Southern California and head back to the continent of mediaeval cathedrals.  Now, why can’t those clever Californians buy Chartres and rebuild it in Beverly Hills?  Then they really would have everything I like.