THE RITZ RESTAURANT & THE PALM COURT 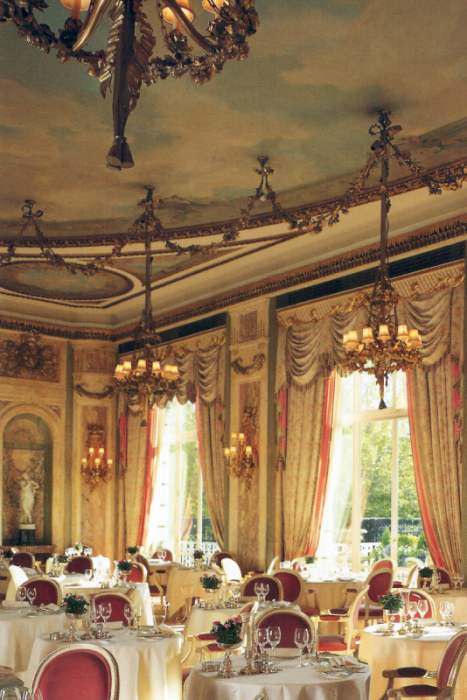 Four decades have passed since my first visit to The Ritz. Over the past forty years I have observed its highs and its lows. It has, I think – even during its sadder moments – yielded me more pleasure than any other hotel in the world. But now it is in the finest form I have known – maintained and run to such high standards that it should be designated a National Treasure.

Designed by Charles Mewès and Arthur Davis, this temple of luxury and elegance opened its doors in 1906. Lovers of the architectural style of Louis XVI, these two fellows gave to Piccadilly a town chateau which is a masterpiece of lightness and refinement. It is also one of the strongest buildings in London, not only having a box-girder frame but also (at the insistence of the then authorities, whose regulations had not caught up with modern construction methods) having load-bearing walls.

I attribute today’s wonderful state of The Ritz, first, to its present owners – the recently knighted Sir David and Sir Frederick Barclay. They have ensured that absolutely no expense has been spared in the restoration of this remarkable institution – with the result that it now sparkles and shimmers with all the force of a Fabergé casket. (Small wonder that members of the Royal Family seem to find its salons to their liking.) And the owners have as their right-hand man a stalwart gentleman who, since 1995, has worked tirelessly to ensure that everything at The Ritz is of the finest. That gentleman is Michael Day. 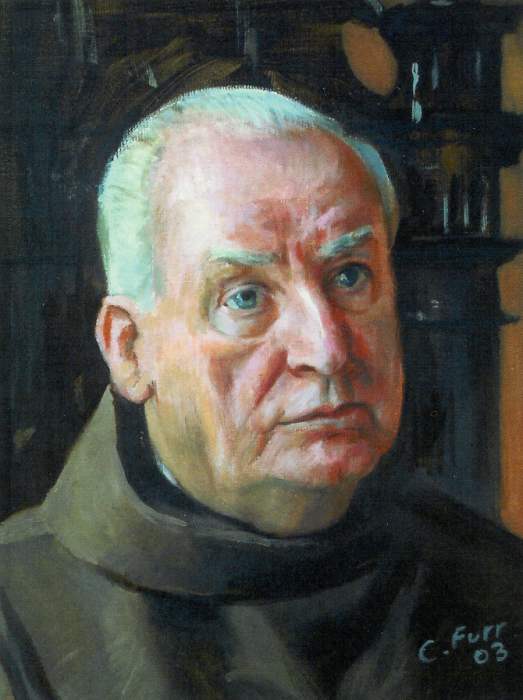 My picture shows the portrait of Mr Day by Christian Furr (portraitist to the Queen). You will note that he is wearing a Franciscan habit, being an affiliate of the Franciscan Friars of the Atonement. Does one have to be a Catholic to be a great hotelier? No, but it probably helps – think of all those paintings of cardinals at dinner. Always well-dressed and often with his favourite Havana, Michael Day – known throughout the hotel as ‘Mr President’, for he does preside exceedingly well – walks the halls and corridors with an eye for those details which turn a good hotel into a great one. His motto, I suspect, is ‘Each day and in every way I must make The Ritz a little better’. Long may he reign.

And so to my recent visit to The Ritz Restaurant, to try the food of its new chef, John Williams. Mr Williams has been tempted away from Claridge’s, and has long experience of running the kitchens of a luxury hotel. Now his cuisine is sent into the most beautiful dining room in London. It was a Friday night – and therefore there was to be dancing. The lights in the garlanded chandeliers dimmed and the band struck up – what else? – ‘Putting on the Ritz’. And there – with the waiters in their white summer jackets (their tails ready to return for the cooler months) dashing this way and that, with the candles in polished candelabra flickering across the white and the pink and the gold and with the Melba toast in its silver dish on my table still speaking of an earlier gastronomic age – was the magic of The Ritz.

Thanks to a conversation earlier in the week with Stuart Geddes, a fine young antipodean and Assistant Restaurant Manager, my first course was already known to the kitchen. Omelette Marie Antoinette is no longer on the menu, but you, too, should ask for it. With mushrooms and black truffles and with a black truffle sauce, it is the ideal way of starting a meal in these surroundings – delicate, yet indulgent and full of lovely tastes. Next, Dublin Bay prawns, courgette flower and bitter almond sauce – an intelligent composition, well executed, with the langoustines deliciously sweet. For my main course the Restaurant Manager, Simon Girling (who presides over the room with courteous and affable efficiency) carved a good Beef Wellington by my table. The Iron Duke himself would have rejoiced at its bloody, tender meat. And finally, a grand and grandly enjoyable cheese soufflé – soft and gooey and very large. I concluded that the new chef has settled in very well indeed. (Around £100 for four courses from the carte.) 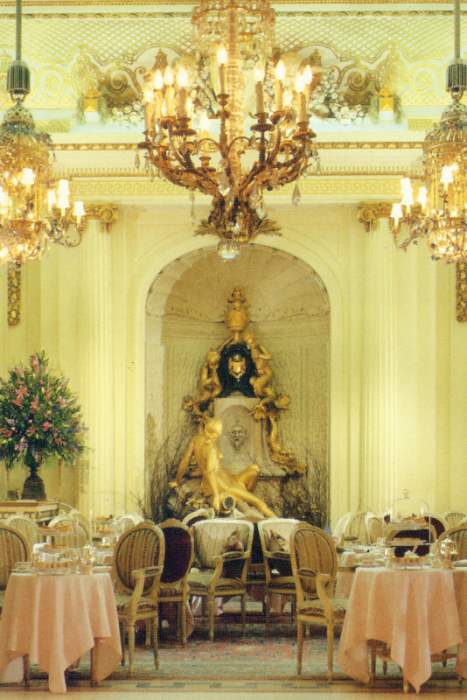 I should mention the friendliness of the service, for it is important to know that at The Ritz the grandeur and the formality come with smiles and courtesy. One tiny sin of omission: the napkins are not changed when diners leave the table for a moment (a small, but significant matter, which I commend to the attention of Simon Girling and Michael Day). Yet it is difficult to concentrate on such little faults when one is charmed by the attentions of waiters like the young Italian, William Cristanelli, and by the excellent advice of the sommeliers.

Head sommelier Lucio Donato brought to me the most glorious half-bottle of champagne with which to begin. The Krug Grande Cuvée (£85), in its full-bodied yeastiness and long aftertaste, was quite stunning and the perfect partner for the omelette Marie Antoinette. And the St Emilion Grand Cru recommended by chef sommelier Eric Artière was exactly what the Beef Wellington needed – massive, full-bodied but properly balanced, with an abundance of black fruit (Chateau Le Castelot, 2000 - £68). These gentlemen clearly know their cellar. The list is not encyclopaedic, but it does have some tempting bottles. The reliable Louis Latour Grand Ardèche chardonanny, in its 2000 vintage, is £25. Drouhin chablis can be had for £8 a glass. But the greats inevitably tend to dominate: a trio of Montrachets (1988 Bouchard père et fils - £470, 1993 Drouhin - £810, 1998 Leflaive - £720), first growth clarets (like 1961 Lafite - £2,800 and 1970 Latour - £1,450), super-Tuscans (1997 Solaia - £270) and the finest from Down Under (1996 Grange - £530). The glassware is improving, but it could still be better. This setting cries out for glasses by Spiegelau or Riedel.

Filled with satisfaction by this splendid evening, I resolved to return to The Ritz for another meal – but this time to its other great provider of food, the Palm Court. When I first ate afternoon tea here, the price was half a guinea. Now the cost is £32. Yet it is still a bargain. At its head, as Palm Court Manager (always immaculate in tailcoat and starched collar), is the remarkable Michael Kotb (see photograph) an Egyptian gentleman who runs his domain with all the panache and flair of a Pharaoh from his native land. He is another of the pillars which support the true excellence of The Ritz. He ensures that all the sandwiches and scones and pastries are first class and that his waiters (dressed, as in The Restaurant, in white jackets for the summer and in tails for the rest of the year) press further helpings of them upon his happy guests.

To sit at table number 5 in this exquisite chamber, with a bottle of Ritz champagne (£54) in the bucket and a pot of Lapsang on the tablecloth, listening to the notes of the pianist rising above the buzz of conversation, is to know why tea at The Ritz has become such a popular institution. And now, for those of you who like your tea a little later – indeed, who like to turn it into an early supper – there is the Champagne High Tea (£45), wherein to all the delights of the set afternoon tea are added a glass of champagne and a savoury, in the form of a sage, bacon and onion tart.

Forty Years On and I can report that The Ritz is better than ever. As they cry at the Opera House: Bravo!

Afternoon tea £32   Champagne High Tea £45
Bookings for afternoon tea need to be made well in advance.